Cassandra vs MongoDB for a bootstrapped startup

The database. One of the most boring yet most essential piece ever design by mankind. Its sole purpose, serve as a place where we store the data used by our uber-awesome-oh-so-incredible™ application. So long as it is online, that we can store our data in it, and that we can retrieve it, we tend not to concern ourselves too much with it. As stated by Patrick McFadin : “Is it scaling? Yep. Is it online? Yep. Boring”. When Bootstrapping a startup, one tends to have little time (unless you’ve quit your day job) and little resources. Getting to the point where you have a boring database would indeed be the dream so that you can focus on your app. To get there however, the very first step is picking the right one based on your application’s needs. There are many options out there. One that I have seen bee heavily recommended back when I was working on a side project was MongoDB.

In my time scouring the web, I have come across many recommendations, some of which I have followed when working on a side project. Back in 2013, MongoDB was still the rage. All the cool kids were using it. Why not after all? Who could resist the promise of dumping all your nested data in a collection and retrieving it just as easily? Database schemas? Why use that when you can have a dynamic schema instead? Plus, it’s all asynchronous and fault tolerant. Everything is awesome…. Note to self: don’t believe every you read on the internet.

Well, not quite. Having played with MongoDB and having read the experiences of other (see McFadin’s, Mei’s, Emin’s and Morgan’s posts), I can attest that it is a good and still improving database that is lacking in a few areas, the most important of which being concurrency and fault tolerance. Plus the idea that you can just dump nested data in there is not a great one. I understood early on that retrieving segments of that data or updating it atomically can be quite painful the more nesting your data has. Also, there is a cost to having a dynamic schema vs a static one.

To be fair, I love MongoDB. It was fairly easy to get started with. It was awesome. The database was indeed boring…until the application’s complexity and modeling need started to increase.

It can be quite difficult to model a social network using MongoDb. Let’s take a naive example. Let’s say you have a User class defined as below:

A fairly simple model. What happens if user X requests the friendship of user Y? Add user X to the friendship to review list of user Y, AND add user Y to the requestedFriendships of user X. 2 spots needing to be changed without transactions. Should user Y decide to accept user X’s friendship? Now 4 spots would need to be updated, i.e. remove the users from their respective requested friendships and friendship to review lists, and add each other into their respective friends list.

In an ACID world, the multiple updates would not have bothered me that much. If one update failed, the other would not take place. With MongoDB however, due its fault tolerance woes, it could happen that in between requests to the database, something goes awry (a train passes over the datacenter where my mongodb server is located and causes a momentary loss of connection), if my write concern is not ‘Journaled’, i.e. if I go full async, I can find myself in a state where it would be impossible for me to detect that a failure has occured, and thus wouldn’t be able to “manually” reverse whatever changes I had made.

What I’ve found MongoDB to be useful at is to store data with a minimal amount of nesting. It makes it easier to retrieve later. For more complex modeling, especially in the case of social networks, I have found Neo4J to be a much better choice. MongoDB for the writes. Neo4J for the reads and/or Elasticsearch if you need full text search capabilities.

Assuming you use a service like Compose.io to host, scale and back up your MongoDB instance’s for you, your are looking at least 18$/month. If you need to add more databases to complement Mongo’s shortcomings, using Neo4J in the cloud with a service like GrapheneDb will cost between 50$-400$/month, while Compose’s ElasticSearch would cost you north of 45$ a month. Add what you need an multiply by 12 month and that’s how much you need to set aside just for your database cost. You obviously could handle the hosting and scaling yourself to reduce that cost.

If you’re bootstrapping your startup and have limited time, but some resources, I could see how you could build your application with MongoDB initially to get a proof of concept and get funding, or even to get an MVP to test the market and fail fast. It is also possible like that your use case would work just fine with MongoDB like Server Density’s.

UPDATE: For more on MongoDb, please check out this comprehensive tutorial from Guru99. There are plenty of alternatives to MongoDB. Some of the choices out there range from the good ‘ol PostgreSql, Riak and Cassandra, to up and coming (and still improving) RethinkDb.

My personal criteria for determining which database to use are: 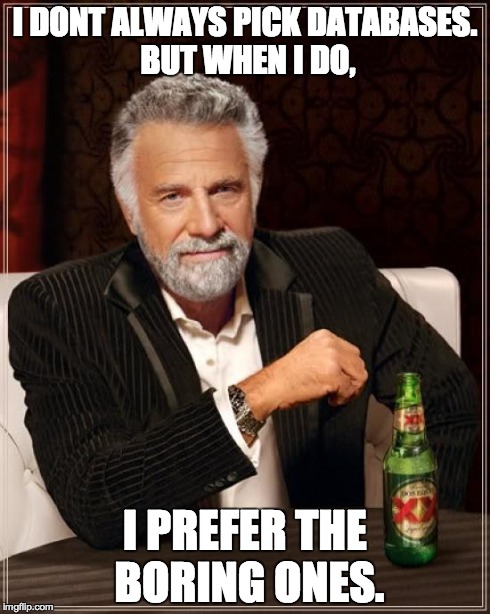 Based on that, Cassandra jumps out to me as a better choice. It is highly available and easy to scale, and well documented. It has a thriving community of users, and has been adopted by many dev shops I look up to like Netflix. It is also supported as a backend storage mechanism for Titan, meaning that in my previous scenario I wouldn’t need to rely on Neo4J, thus reducing expenses. I’ve been playing with it recently, and so far it’s been fairly painless. The only drawback: its cost.

UPDATE: For more on Cassandra, please check out this tutorial from Guru99.

If you care about using Cassandra as a service, you could use InstaClustr for a price range of 299$ to 404$ a month per node. Setting up the cluster yourself on aws with minimum of 3 m3.large machine would cost you about 300$ per month. That is more expensive than just MongoDB, less expensive than MongoDB with side databases. In theory, for just an MVP, you could use a smaller ec2 instance at the cost of performance, then switch to recommended configurations once you’ve validated your idea.

The database should be boring. It should at its best be a tool that facilitates building your application, and just a place to dump and retrieve data at its worst. It can help your business grow. It can cause it to fail. Choose wisely.